Colonel Cyrus K. Holliday a native of Pennsylvania, came to the Kansas Territory in 1854 with funding from Eastern investors to build a railroad. The City of Topeka was incorporated February 14, 1857 with Holliday himself as mayor. The ATSF Railroad was establish and attracted entrepreneurs to the area immediately.

These various entrepreneurs, within three decades, brought Topeka to it's height of glory, as one of the five most progressive cities in the nation. That achievement has to be credited with the establishment of street railway systems with omnibuses--cars on rails pulled by horses and mules. Construction began on our first railway system April 5, 1881. Later, Spring 1888, during the steam era of "trolleys", James Patten--CEO of the Boston Syndicate--came to Topeka from Boston to "electrify the steam line", owned by the syndicate, and "operate a complete electric railway." The "factory" where the electric technology was invented, tested and perfected for public use, (the Union Passenger Ry. Co in Richmond, Virgina) officially operated the nations’s first successful electric trolley system on Feb. 2, 1888. This may have included some testing of the technology in Boston. This was the origin and test-market where the electric technology was perfected before the "new product" would be offered for sale to investors in other cities. Topeka apparently became the first location in Midwest and Western America to establish this proven technology--electric trolleys. Topeka's electric trolley system was in test operations on March 28, 1889, V.I.P. demonstration and operation on April 2, 1889 and in official operation to the general public by April 9, 1889.

HOW AND WHY did Topeka move so fast being so far from Richmond? Answer: Topeka had an "edge" on this technology as CEO's of the Boston Syndicate had major real estate investments catered to by street railway lines (which they owned) as they endeavored to make Topeka their promotional "Boston of the West".

Topeka was also said by various press sources to have the longest electric trolley line in America. One source states that Topeka's line was in the top five largest systems in America that year.

Topeka, according all press reports and historians writing on the subject, had the largest electric plant in the world at that time----generating electricity for the 32 mile railway system and power to run 50 cars. This power plant was located on 414 E. Second Street (between Madison & Jefferson). Many visitors would come from all over America and Europe to study Topeka's technology. These trolley railway entrepreneurs took the technology, coupled with highest quality coaches made, including some fabricated here, and offered a model of the greatest street railway system in the nation. Later, John Wilson (his son "E.W" supervising construction) established the Topeka & Vinewood Park Railway Company and revamped the already existing Vinewood Park into the "Worlds of Fun" of that day--one of the largest, highest tech resorts and amusement parks in the the nation, with perhaps the largest electric carousel in the world, and a train simulator where citizens could "take a ride" in a train coach, feel the sways, turns, and sounds along with "moving scenery" out the windows. This technology was 1903! Vine Park encompassed forty acres just east of Lake Shawnee. It was Topeka's play land and vacation getaway.

Herein is their story, the most exciting history available about aggressive beginnings and early towns in America. That's my personal opinion. You will find that complete history compiled within these pages--somewhat of a "rewrite" and modified version with my own comments of Omnibus to Motor Bus, published by Shawnee County Historical Society. It is a compilation of Topeka authors and local press sources. The editors of this source were John W. Ripley along with his associate editor, Robert W. Richmond. There are only two known hard copies still available to the general public and they are both available at the Topeka Public Library--although a little weathered and "tattered". This historic section of The Steel Rails Advocate website is a modified and almost exact REcreation of the entire book, with all photos, charts, and newspaper articles. Expect to find, progressively, comments from me, JT Davis, editor and founder of Steel Rails Advocate and this new version of Topeka's streetcar history entitled: "Topeka's Complete Trolley Railway History by JT Davis."

I will further expound upon certain modifications of this publication here as well as the rewrite modifications already mentioned. For ease of reading I have included updated grameric principles including updated capitalization principles, updated possessive apostrophe rulings, updated terminologies, punctuation and special fonts to offset some newspaper and other lengthy quotations. Added photographs are used for illustration purposes. Old abbreviation principles are left intact as they are still easily understandable by modern readers. Certain unclear sentences and phrases have been made clear to the modern reader. Certain important facts are sometimes put in red or green type. And lastly, my insertions and "editors comments" are included in brackets and oftentimes in green or red type. 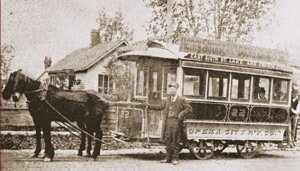 Details of Early Topeka at it's Founding

CREDITS: In addition to Ray Hlmer’s numerous illustrations in this issue, we are indebted to Harry C. Snyder, Kansas Power and Light Co, and the services of the photographic department and librarians of the Kansas State Historical Society. We have received excellent cooperation from various offices in the Municipal Building, County Courthouse, Secretary of State’s office and Topeka Public Library.

See special credits for the Shawnee Co. Historical Society in the green text at the bottom of the column to the right.

(click on the chapter names to go to the sections.)

Hack: The act of soliciting passengers in public place competition with other modes of public transit.

Hackmen: A historic equivalent of a modern taxi-cab driver.

Streetcar: Term never used in the early days, to refer to our modern-day concept of a “streetcar”. Only in retrospect along about the early 1900’s did the term ever refer to electric trolley cars running on steel tracks. That was when the “new” wore off of the electrics. At the point when electrics became common, the term “street car” was used to refer to all forms of street cars from horse to steam. When the first electric trolleys were introduced, they were referred to as “electrics” in all references to electric trolleys in this historic publication.

Trolley: Late in the year 1888, Topeka learned that it was to have the first trolley car system in Kansas. The term Trolley” had not yet come into common usage. The local press referred to the new system as the “Electric Railway,” and for years that followed, Topekans rode on the “electrics.” Oddly enough, the term “motor” had been applied to the steam dummy engines that were to be replaced after eighteen months of service.

Horse car: Cars on tracks and pulled by horses or mules.

Jewett Cars: One of the five Jewett Car Company interurban-type electric cars purchased in 1903 by Topeka Railway Co., for service on an interurban line, Topeka to Kansas City, that was never built. For the next seven summers the big green cars were familiar sights to Topekans who knew them only as “Vinewood cars,” because of their service on the Vinewood Park line. The eariler “cow-catcher” would, a year or two later, be replaced by a wide metal fender, standard equipment on all Topeka Railway cars.

Old Betsy: Old Betsy was a smaller passenger car used for many years, smaller then the other cars used by the Vinewood Railway service and used exclusively for Highland Park service. This car was built in the shops of the Railway Company. On one side of the center aisle was a long seat with it’s back to the windows. The other side had conventional seats for two, facing the front of the car. Old Betsy also doubled as a funeral car from 1903 to 1926. It would carry casket and mourners to Topeka Cemetery.

Dummy / dummy railway / dummy line: Steam powered motive power for trolleys running on steel tracks. (This improved method of locomotion was provided by small steam driven locomotives developed largely by the huge Baldwin Works in Philadelphia. Baldwin was a veteran manufacturer of fine road locomotives and had entered the field of replacing horse drawn cars on city systems with their small engines called ‘Dummy Engines.”) The Topeka Rapid Transit Railway began adding these machines in mid 1887. The name ‘dummy” was applied due to the camouflaging of certain parts for street use–as these engines were carefully covered over with a small superstructure which hid any resemblance to the road engines which were famous for causing the horses to bolt and run away. One main drawback spelled the rather quick end of the dummy engine. The problem lay in the fact that although it was disguised as a horse car, it still produced smoke and cinders where ever it ran. This factor was an irritation to the housewife on washing day. They also cause some concern to horses and men alike in quiet residential neighborhoods with their chugging along like any steam engine.