Details of each step of the Streetcar project.

Step 4, August 24, 2011: Stan Meyers, Topeka Sustainability Board, attended a recent "Modern Streetcar Party" at Union Station in Kansas City and walked through the ameriTram streetcar that was on display. It is manufactured by Kinkisharoyo International LLC and uses a proprietary propulsion system known as e-Brid Technology. It employs both overhead catenaries and on-board lithiumion batteries for the power source. Photos are posted on the Kansas City Star at the following link:

Much enthuiasm and interest is now shown by numerous city officials at City Council, Sustainability Board, and Topeka City Transit Authority. This is a sure sign of progress moving forward in putting streets cars in Topeka.
gallery link:

Step 3, July 18, 2011: John Davis; Editor, Topeka Citizens Advisory Council member, Karen Hiller, Councilwomen 1st Dist., Topeka City Council, and Paul Post, member Topeka Sustainability Board, gave a presentation before the Topeka City Transit Authority with Janlyn-Nesbett-Tucker, CEO and GM of the TCTA presiding. The Phase One of the 37 mile loop River Front streetcar track alignment was summarized. See a short "nutshell version" at the 'Round About Bicycle web site. John Davis added the inclusion of a pilot project--a 0.96 mile demo streetcar track for the Expo Center grounds was presented A proposed local fundraising entity refereed to as the "Trolley Club" was suggested. Response was all positive and well received with further efforts to be investigated along with the funding of the expense of bringing a streetcar manufacturing and installation expert from Oregon Iron Works to Topeka to access our situation and advise us on how to best implement our streetcar project. See the new addition of the Expo Center details and maps and the Trolley Club link.

Step 2 April 1, 2011: John Davis was introduced to the Sustainability Board, made a presentation and was received well.

Present were members of the Sustainability Board with guests. The guests were John Davis, Karen Hiller, City Councilwoman 1st Dist., and Janlyn Nesbett-Tucker, CEO--General Manager of Topeka Metropolitan Transit Authority (TMTA). Each one of the guests were advocates of the streetcar proposal.

The presentation entailed the proposal of an approximate $200 million dollar rail system and how to design "scaffolding" to cause continuous growth along the river front to support Topeka's River Front project and to attract developers and other investors to the alignment of the steel tracks. Hybrid streetcars was suggested where overhead wires could be avoided saving $4 million per track mile totaling $148 million in savings that could be applied to track mileage--and track is what developers are attracted to--not the technology of bring electric power to the cars.

Janlyn Nesbett-Tucker also gave a brief presentation about streetcars and light rail in other cities, and shared a case study of success in the revitalization of the city of Tacoma, Washington. She indicated that TMTA would be an eager partner in exploring such a development for Topeka.

Discussion included discussion about streetcars as well as economic development, tourism as an industry in Topeka, and developing focal points of interest for Topeka. The desire to "save" the Morrell Meat Packing building on Crane Street, which is owned by Hills Pet Food, Inc. at the present time, and who also has no plans for the building. John Davis expressed his vision of the city recapturing ownership of the building and converting it into a the "River Front Terminal" crowned glory of the Topeka skyline and the focal point of the River Front theme.

John Davis handed out a single-fold summary of his proposal and a second page. Paul Post handed out some printed material about Rick Gustafson. Paul had also previously e-mailed the members a major survey document about streetcars and had also sent them links to key web sites.

Paul supported John Davis's proposal and proposed that the idea be referred to the Sustainability Board's Transportation Committee, of which his is a member, for further exploration. That was agreed by consensus of the group, and one person who was not a member of that committee indicated that he would like to participate as well. Paul suggested that when the committee began it's work, that it would reach out to include other prospective partners such as Heartland Visioning and people working on downtown redevelopment.

There should be minutes of their meeting at some point as well. A link will be provided to the minutes when they become available.

This meeting was a wonderful success--even far beyond the expectations of everybody who were advocates of the streetcar project.

Step 1 Feb. 21, 2011: A meeting occurred between Karen Hiller, City Council Woman, Paul Post, Sustainability Board Member, John Davis and Kristina Smith of The Steel Rails Advocate, in the offices of attorney Paul Post, about the first official step toward getting a plan developed for adding a light rail system in Topeka according to the Phase One plan this publication is proposing.

At this meeting, commitment was made to invite representatives from Portland, Oregon to Topeka to do a cost analysis and advise us on matters such as power options, track laying, and other matters. This will occur within weeks

A step by step column (to the right of this column) will track the number of individual steps the City Council takes to move us forward in getting streetcars back on the streets of Topeka. I have taken numerous steps over the last couple of years (prior to this newspaper which IS one of the steps), but the city's movement will be monitored in a series of steps so our readers can track the progress.

We are also developing another, perhaps superior, Phase One tourism alignment which goes no farther west (for right now) than Gage Park and Flemings Place, and includes Highland Park (thanks Karen Hiller--good idea) and at least a northern corner stop at Lake Shawnee. The alignment will double back via the convention center and Washburn University. (The Kansas Museum is a long way out there! Why? I don't know. But about half of the track layout distance of 37 miles is taken up just trying go get to Kaw River State Park and the Kansas Museum and backtracking along 10th St. to the Fleming Place. Question then arises, "would the track miles between Gage Park and the Kansas Museum be better spent attracting development in Topeka by routing northeast through Highland Park"? We'd gain some riders from convention activity at the Expo Center in a backtracking route from Lake Shawnee. Its an ugly trip back to town and very un-River Frontish, but Highland Park, Vinewood, and Lake Shawnee may just make up the difference with additional develop--ment activity in the Highland Park area to create jobs and expand our population. The track layout theory then would be to do a figure"8" with two intercepting loops with Quincy Station in the middle gaining stops twice as often.

Well, "people of the government, by the people and for the people," WHAT DO YOU THINK?

You may need to see the proposed "Highland Park -- Vinewood" track routing section on this web site. Just scroll to the bottom of the "neighborhood breakdowns" in the far right column--just one map down from Map 15. Maybe it could be improved. Just write in on the Contact Us link.

John Davis and Kristina Smith met with Jeff Smith CEO, Hills Pet Foods, about the old 7-story Morrell building on the Hills property on February 24, 2011. It was found that Hills purchased the property about a year-and-a-half ago and Jeff Smith personally knew of no history of the building and does not have even a clue as to the building's destiny. Kristina Smith and John Davis are hoping that even this early stage of track strategy, routing around this old historic building may influence Hill's plans about the building's future. Jeff was presented a high quality frameable photograph of the The Steel Rails Advocate's restoration version of the building as it appears on our home page. Hopefully, the picture will be hung on the office wall. The meeting was very pleasant.

Now we know much more about the building than ever before, thanks to the Historical Society and the Public Library folks. That information, along with some old newspaper articles specifically about the then "new" 1940-built building #50, is contained in this newspaper web site. Click on the buildings photo on the home page and follow the links. 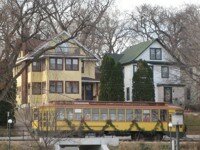 TIME TABLE STUDY OF PHASE ONE ROUTING Conducted on February 23, 2011

The route study was from Quincy Station counter clockwise covering Oakland first. Total time on the long route stretching as far east as Billard Airport and as far west as the Kansas Museum.Total Time; 2 hrs and 2 min. Total round-trip distance is an even 37 miles. This requires a 3 hour time frame in which to complete the route requiring three streetcars spaced one hour apart. We added no lengthy stops--just roll by's for this first sampling. There will be 30 to 40 minutes to kill leaving extra time at Quincy Station for a break for the driver. A hybrid of that option would be a reasonable break for the on-board-personnel at Quincy Station plus three 10 minute stops enroute. These 10 minute breaks would likely be at Billard Airport, Kaw River State Park, and Fleming Place.

Menninger hill presented a problem because the gates were closed barring us from following the map as shown on "Route Strategy", "Map 10--Gage Park to SW Wanamaker Road". This was the road with no name going north and curving west to the west of the Governors mansion. The road's name apparently is marked by a tourist sign entitled "Kaw River State Park" just next to the road, although this was not a street sign.

Getting from the German twin towered church on 3rd Street and McVicar to 2nd St. to transition to 1st St. did not go as the map 7 shows because the streets have been all blocked off there. Bing and Google maps did not show these changes either--at least at that time. so we had to get across Topeka Blvd. via 3rd St. and go straight in to Ward Mead via Fairchild. After entering Ward Mead, the street earmarked for exiting, down through "Pioneer Village" main street had a gate that was closed. So actually laying of track would have to get rid of the gate (useless anyway as it isn't designed to keep out humans on foot). Using this route to get to Ward Meade would be the most economical way to route the tracks, but I'd like to see a right-of-way created to get to target 1st street as the tram leaves the church heading north. The tracks would enter the Ward Mead Park from the north-east corner on it's own right-of-way.

Bottom line, we have almost an hour to include stops, Kaw River State Park and two to three ten minute stops with "leave no later than" times with Fleming's Place being the final "buffer zone" on "no later than" leave times.

Soon, a preliminary time table will appear by clicking the "Time Table" button. Of course, a refined version will have to be done with actual streetcars on tracks.