The Phase One street railway system has stirred up much interest among Topekans, prompted city officials to invite me to give presentations, to join them in giving presentations before numerous committees and boards of city government. But attention span seems short and things fizzle out. Click groups huddle and talk but go nowhere. I have donated hundreds of research hours to learn about what approximately 45 other U.S. cities are doing to bring street railway systems back to their cities and to uncover the reasons why they are doing it, along with the fantastic results they are getting. I have spent hundreds of hours as webmaster, building the largest web site on the globe on the subject of street railway systems and applied the information specifically to the city of Topeka.

I have also given presentations before the Citizens Advisory Council (of which I am a current committee member), passed out pamphlets there as well as to specifc Neighborhood Association groups.

It is apparent now that we do not have the leadership in our city government to get anything done – even in the face of a tidal wave of economic destruction looming overhead resulting in the loss of many major employers here.

Yet the Phase One proposal as outlined in the Steel Rails Advocate offers a boom-town effect upon Topeka and even affecting the entire state at a time when we need it the most.. Yet our city is “asleep at the wheel”.

See the “Petition” link on the home page to view an outline of what the proposal will do for all citizens who live here and what it is expected to do for generations to come. This petition letter also proposes the steps to take for the citizens to bring this plan about.

I am convinced that the “Weak Mayor /City Council" system that we have as a form of government in Topeka is the worst form of government for a suppressed city such as we are and in dire need of a fast, drastic change. We need to revert back to a “STRONG Mayor / NO City Council" system where the mayor hires and fires all personnel under him and lateral to him. That would include city manager. Under this "Strong Mayor" system, citizens can remove their mayor if need be without a city council being in their way. With this system, the mayor knows who he’s working for--the citizens--as opposed to nine city council members who solely run the city and say “yea” or “nay” by their votes. The “STRONG Mayor / NO City Council" system has a legislative group under the mayor who have no control over the mayor. The city government, under a “Strong Mayor” system is OF the people, BY the people and FOR the people and is working fine in many U.S. cities today. In these cities, it’s still America. But not here.

A disadvantage of the “WEAK Mayor / City Council" system is that the city council members have too much power. In our example, nine people basically run Topeka. They do not represent the will of the people as a whole. The people are shut out. A weak-mayor role causes the mayor to sort of pose as a “town pet” and serves as a passive PR representative. Another disadvantage of having a city council is the very job description a city council member. Each member represents a district. This causes member competition for available monies within the city funds for their district. The most competitive and persuading presentations get the 'lions share" of the city budget allocated for improvements, while other districts may become second-rate priorities and go lacking. Each council member has a tendency to have tunnel vision rather over-all vision for the good for the city as a whole. Monies gained for their district surely look good when time comes to update their resumes’ or beef up their track history for reelection. This partially explains why so many politicians have their special interest projects which receive funding as opposed to the dire needs of the city as a whole.

Then there is the blockade between the mayor and the people. That’s the city council. It is a bad idea and as far as I am concerned, anti-American. Just look at the results. Our last mayor, Bill Bunten, was quoted by the media as saying, "It is up to the citizens to bring urgent matters to the office of the mayor." But under our current city council system, that is difficult because these matters are presented before a city council which will vote against matters of the public's concern, especially if these matters interfere with a council member's individual pet projects and favored agendas. The mayor, who may favor the public's point of view may wind up having no power over the final decisions of the city council.

This proposal for economic development was introduced five years ago. Nothing has happened recently except this newspaper--The Steel Rails Advocate--with it's updated and refined "Phase One" proposal for a street railway system, as far as I know, and I am in a position to know.

Let’s consider voting our well qualified mayor to be our STRONG MAYOR and do away with all opposition, the city council. These city council members would serve Topeka much better as a legislative body. They all are good people, with very bad job descriptions, and they do an admirable job of fulfilling those job descriptions. In voting FOR a STRONG mayor system with no city council, we are giving the current city council members a better job description and moving them out of our way. I believe this is the only way we can have our River Front railway system established and operating in the near future.

I also believe our funding ability for this railway system already exists, if financed over the next ten years. It can be found within our current tax revenues if only allocated differently with a different set of priorities and an official declaration of economic emergency that would justifie it. That would take a strong mayor system of government which would be answerable soley to the people who elected the mayor--not a city council with selfish and sometimes irresponsible adgends and priorities.

Send in your thoughts and any ideas that you have to offer. That may include a modified hybrid of the “Strong Mayor” system and let’s get this organized enough to force it to an election. We are the people. Maybe most of us don’t realize it, but we are the ones who have ALL the power, and ALL the power is ALL we need. We merely need to organize ourselves and force it to the polls. 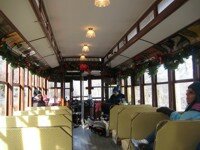