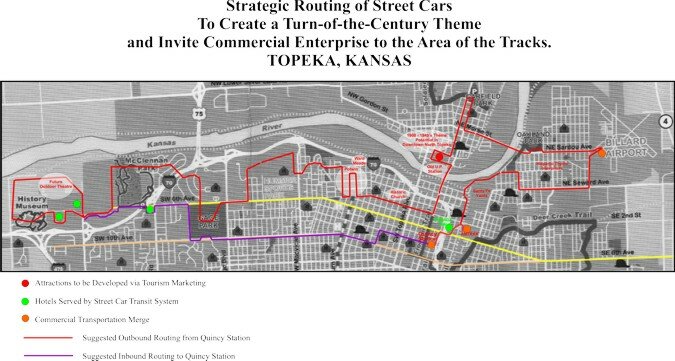 The track strategy is to tie in all our river front features together to offer themes such as "turn-of-the century", "river view", "Victorian", "roaring '1890's", "20's", "30's & 40's", "50's", "parks", "ATSF", "Union Pacific" etc. for targeting regional tourism. This is the "Phase One A" stage of laying steel rails for modern streetcar transportation. Getting from point A to point B in the shortest time will not be the object of this phase. Those phases will be reserved for Phase Two and Phase Three--practical transportation to replace some of our bus routes. Although, some areas covered via Phase One A of the track layout will offer practical transportation getting in and out of certain areas and tracks will never have to be laid again to achieve this. Transfers to busses would be required to cover all of Topeka until the other two phases are completed.

It covers about everything that can entertain tourists accomplishing as much as we can with as little track miles a possible to complete one loop. This will be a profit making phase. The project will "collect the gold at the end of each end of the rainbow to jump start Topeka into the greatest economic development period in its entire history. Click the "Economic Development" button to see how this will happen due solely to the Phase One "A or B" River Front loop. ("B" alternative is explained below) The other phases will be pure overhead and very little profit if any. Certainly a drastic increase in ridership throughout Topeka, but probably not more than merely self sufficient at best. Phase One with the River Front theme should solely fund the other two phases.

This route will be for pleasure. A long ride with interesting stops and requiring no transfers. A multi-car tram, River Front Zephyr, will handle the main tourists transportation with single cars following the Zephyr every half hour. The single car, older-style (yet modern), streetcars will require transfers to intercept other routes. The Topeka streetcar system will mingle with mixed traffic, requiring no exclusive right-of-ways as the super high-speed trams in larger sprawled-out cities in the U.S. The single cars will have more stops then the River Front Zephyr. The Zephyr, at least, will have a conductor on board as well as a stewardess/tour guide. Some beverages should be allowed as well as snacks on this ride. Certain small groups of 4-6 should be able to pay extra ($5.00 per person in the party?) to reserve group seats on the Zephyr. This loop will have no real destination, as the streetcar itself will be the destination and the streetcar will also be the entertainment. Riding the streetcars in Topeka, especially on this loop, would be great entertainment for families with children. The fares would be reasonable enough to be economical. This feature would be especially popular for folks living within 30-50 miles of Topeka. An easy trip costing little time or gas and offering a spectacular way to enjoy our ever-increasing "people stops" and "hangouts" and amusements along the way.

Bottom line on this Phase One (A or B) River Front loop is to be marketable regionally with the various themes along the route. This loop is designed to attract investors to the alignment of the tracks due to the permanence of the infrastructure of steel tracks, and escalate the development of the River Front many times faster than it otherwise would ever be developed. National tourists could be brought in via travel agency promotional efforts out of Topeka promoting worthwhile and impressive themes for the first time in Topeka's history. Beyond 50 to 100 miles of Topeka, it would take telephone, video, web, and tourism pamphlets to organize tour groups. That would be the fun part and the easy part. Who wouldn't like to have a little office setup and promote a powerful and impressive one-of-a-kind product as Topeka's various and numerous themes as outlined in the Phase One River Front layout?

See the breakdown links of various neighborhood segments of the Phase One track layout on the bar to the right of this page.

This Phase One strategy is perhaps superior to the one above. Under this plan, the Phase One tourism alignment would go no further west (for right now) than Gage Park and Fleming's Place, and would be replaced with Highland Park (thanks Karen Hiller--good idea!) and at least a northern corner stop at Lake Shawnee. This alignment would double back via the Expo Center through Washburn University. (The Kansas Museum is a long way out there! Why? I don' know. But about half of the track layout distance of 37 miles is taken up just trying go get to Kaw River State Park and the Kansas Museum and backtracking along 10th St. to the Fleming's Place. Question then arises, "would the track miles between Gage Park and the Kansas Museum be better spent, in the effort of attracting development in Topeka, by routing northeastward through Highland Park"? Advantage: We'd gain another category of riders from convention activity at the Expo Center in a backtracking route from Lake Shawnee with a stop at the Expo Center. Its an ugly trip back to town and very un-river frontish, but Highland Park, Vinewood, and Lake Shawnee may just make up the difference with additional development activity in the Highland Park area to create jobs and expand our population. This alternate track layout strategy would create an automatic figure"8" with two intercepting loops with Quincy Station in the middle and gaining more frequent links with Topeka's City Transit buses at Quincy Station itself.

You may need to see the proposed "Highland Park -- Vinewood" track routing section on THIS PAGE. Just scroll up (just a little) to the bottom of the "neighborhood breakdowns" in the far right column--just one map down from Map 15. Maybe it could be improved. Just write in on the Contact Us link.

Well, "people of the government, by the people and for the people," Contact us and tell us WHAT YOU THINK? Can you help us improve it. It's your future and the future of your descendants.

1. From Quincy Station to River Road.

15. State Capitol to Quincy Station (via Downtown Topeka via S. Kansas Ave. North to 3rd and back via Monroe St.)

Below is an alternate Phase One replacement link including Vinewood, Expo Center and Washhurn University. It is referred as Phase One B. It involves maps 16, 17 and 18: