Steel rails and streetcars convey some sort of psychological permanence to riders, in a way that a bus do not.

This affects business and development along the corridor.

Since the capital investment for street railway infrastructure is high, versus the near non-existent investment needed for a bus route, businesses are more likely to gravitate towards a rail route. They know they’ll have a long-term investment of quality [comfortable] and high-volume transit service along the street near the street railway. The street railway also acts as free advertising in an indirect sense, unlike subways, where people will see their business as they pass by it.

The same psychology applies to residential development, as the rail corridor increases in value and demand along the street and probably within a block or two from the rail route itself. People moving to the area who rely on transit know that their service is less likely to be threatened with decommissioning of a street railway compared to a bus route. People also prefer the accessability of at-your-door service over that of subways.

How is the extra cost of streetcar tracks justifiable over buses?

1. Developers of high-density urban residential, retail and office space are much more willing to invest along fixed transportation facilities.

2. Steel wheels on rails have only 1/7 the rolling friction of rubber tires on pavement, with the range and energy savings that ratio implies.

3. The passenger-to-operator ratio on streetcars is always better than on buses.

4. Given a choice, riders much prefer rail vehicles so revenue ridership is greater.

A major benefit is being felt as light rail is reintroduced in many areas over the U.S. That benefit is economic development. Employers are attracted to cities which provide light rail transportation. Investors gravitate to the alignment--just as “in the days of old.” Development within three blocks of the alignment has shown in some specific instances in Portland, Oregon, to generate massive development in areas of only a few square miles of surrounding waste land near the alignment. This development occurs on-going over several years after the introduction of the tracks.

Here's a track record of economic development to ponder.

Our recent article on New Haven's interest in a light rail streetcar, New Haven: Streetcar starter line priced at "less than $30 million", cited a feasibility study performed by the consultant organization TranSystems, whose results were summarized in a presentation to New Haven civic and community leaders in 2009.

Among the evidence provided, documenting the economic benefits of various tyoes of light rail transit (LRT) systems – both interurban-type and streetcar-type, was a tabulation of the economic impact of LRT on the transport corridors of several selected cities:

• Little Rock --
As the Augusta Chronicle recounted in a June 29th, 2009 article, "The streetcar system started in 2004 and has spawned $400 million in development along the rails." This fast 3-year return of adjacent investment and transit-oriented development, has persuaded civic leaders to pursue expansion of system.

These benefits may be of interest to other communities assessing possible advantages and impacts of LRT proposals for their own areas.

What is a Streetcar?

Streetcars are a type of electric light rail transit that run in mixed traffic. Streetcars are part of a broader urban trans-s-portation system and are used for short, frequent trips within a downtown area. In addition to their transportation benefits, street cars encourage develop-ment along their routes, making their surroundings more desirable and increasing property values.

Streetcars are not only people-movers; they are place-makers. 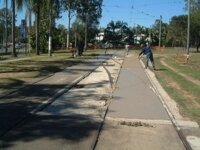 Much destruction of Topeka's city scape has occurred over the last couple of decades simply because of the elimination of the downtown core for being a destination for doing business. This effect has been caused by the great streetcar scandal of the 1950's by General Motors and their affiliates within the oil and fossil fuel industry. They bought out the streetcar companies in order to tear up track and eliminate streetcars. This was to promote fossell-fueled piston engine transportation–commercial and private.

This great scandal uprooted the very factor that shaped our cities and neighborhoods between about 1890 and 1940. Streetcar tracks, being a fixed infrastructure lured investors of that colorful era, to place their interests near the alignment of the tracts. This development occurred along the alignment within several blocks in any direction. The permanence of the steel tracks laid in concrete promised long-term investment security for developers. This in turn offered people-friendly walking and shopping places along the alignment with interesting places for people to "hang out". These places also would include turn-of-the-century mini shopping areas with maybe as little as only a small grocery store, ice cream parlor and quaint little parks with band stands. People could ride the streetcar partway and get out and walk to various "people hang outs" right along the streetcar tracks. Along the alignment, pedestrians would catch a street car to return home or go to another people place. Do to the permanence of the tracks, much effort was made by development projects of various investors to create interesting parks and street car "depots" along the way. This included much landscaping of gardens and mini-parks--especially at main streetcar stops.

Certain Topekans have been searching for ways to bring about an acceleration of the River Front tourism project, and for ways to launch and/or empower the hundreds of good ideas of our citizens. Now, a way has come upon us in Topeka--a light-rail system, established initially for tourism reasons. That, in turn, would attract multiple outside investors to the River Front proposed loop. This would create new employers becoming established here. It would also create and empower many locally originated businesses able to survive the upcoming decades due to the drastically increased consumer demand created by tourism. Suppressed areas would regain their fair portion “of the pie.” Regional and localized tourism up front, and eventually national tourism would become a major component of revenue which in turn would invite investors to gravitate to Topeka along the River Front area. Some investors and developers would set up industry where the light rail projects will be projected to be installed by an eventual official plan– such as southward near the Forbes Field area.

Finally, steetcars help cities preserve their older buildings and preserve interesting older neighhorhood scapes. The importance of preserving our skyscape and neighborhood scapes becomes sort of a code that is embraced by investors who want to tie in their future with a turn-of-the century theme.

Tying in with Economic Development and Tourism is the ability of streetcars to blend in with landscaping, parks and gardens. More accurately stated, they encourage landscaping by their mere existence. This ability is evidenced by the fact that where streetcars go, landscaping and attractive people places follow.

With that fact well illustrated worldwide, then add the fact that streetcars can travel across turf, through parks and right on the grass. Tracking across "the green" adds to the "green" effect because of the absence of heat reflection off of the turf as opposed to concrete. This tracking across turf is on a solid platform because concrete ties are used on top of a gravel bed. These artistic, quiet, clean vehicles are beautifully compatible with landscaping concerns of city planning and parks and recreation departments.

For more on the subject of streetcars creating people places--go to People Places on this web site.