Cities are marketing themselves today as festive, compact, mixed-use hubs centered around transit nodes where residents can live, work and play within walking distance. Such hubs are not only good for our cities; they also encourage the behavioral changes needed to reduce automobile dependence and greenhouse gas emissions. The streetcar will extend the effects of the vibrant transit node from streetcar stations to apartments, shops and offices in downtown areas.

Portland, Oregon is the perfect city to explore to see how streetcars carved out the early neighborhoods of the city and how they are miraculously recarving them today. The City of Portland, being the first city in America to add modern streetcars to its infrastructure, has been doing it for many years. To learn more about their studies, you may want to read their exaustive e-book on the subject. Thanks to the City of Portland and their envisionary population of citizens, applying streetcar transportation to any city to achieve desired results in neighhorhood improve--ments, environmental improvements, economic development, traffic congestion reduction, downtown revitilization, artistic enhancement of the city, and making the city retiree and pedestrain frendly is now rocket science. You may now get out your "slide rule" and design the desired growth of your city by designing a "scaffold" upon which the city will grow for tens of decades. Click this link to read The Potential Influence of Modern Streetcars on Portland Neighbor--hoods. 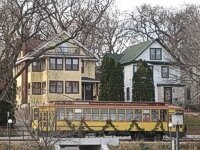 Streetcars and the City: The streetcar will increase the population of downtown areas as well as outskirt areas of cities. This will always include cultural districts. This trend throughout America is enticing the development of areas that are not dependent upon cars for transportation, allowing greater population and economic activity without the congestion and pollution costs of corresponding increased driving. For those living in the central city zones,, the streetcar will greatly expand their walkable neighborhood, meaning they can work and shop in neighboring districts without having to drive. For those living outside the central city core, the streetcar will create more destinations for work and recreation, and allow them to park and ride--a popular new gas saving trend. From each park and ride location, folks will ride rail transit. From there, move about the central city easily and comfortably while only parking once back at the intermediate "park and ride" location.

Getting people out of their cars and onto sidewalks will mean hundreds of new customers getting off streetcars and strolling past the windows of central city businesses every day.

Developers will make long-term investments along the streetcar line that they never would on a bus line. The streetcar’s permanent infrastructure means residents, visitors, and developers can depend on its presence – the “flexibility” of bus lines is actually one of their biggest weaknesses in creating livable, vibrant central city neighborhoods. Although, busses work very well WITH rail transit, as rail transit passengers are pedestrians also and will become bus transit passengers when venturing away from the rail alignment, as busses will be routed to go where rail will not. This will drastically increase bus transit revenue in any city with rail transit available. (study Portland transit)

Most of America's central city neighborhoods were designed for walking and streetcars. By bringing the streetcar back, we’ll be enabling the revitalization of these historic areas of town without needing to demolish blocks of historic buildings for parking. By encouraging new development without the high parking requirements, the streetcar will encourage preservation of any city's history, hence, more people places and hangouts. 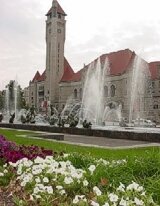 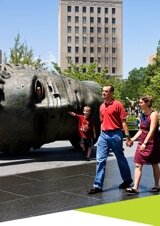 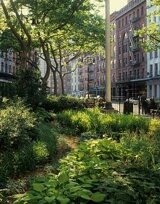